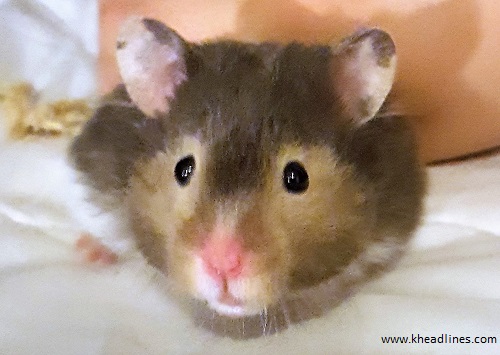 Coookie, the newest member of the family.

So my son wanted a hamster. I mean like really wanted one.

Over the course of several weeks, my 10-year-old washed the windows and cleaned the litter box to prove his responsibility. He even sold some of his Legos at a kids’ consignment story in our neighborhood to raise money to buy it himself. He wrote me a persuasive letter complete with his own hashtag, which my friends repeated on Facebook when I posted his amusing plea.

This formerly avowed  no-pets mom remembered how much I wanted a hamster when I was his age. But I wasn’t sure I was ready to add one to our existing menagerie of a dog, cat, and fish. Worn down by my son’s unrelenting requests (and those dimples and eyes that work to his benefit) we went to the pet store just to look. We browsed the habitats and toys and asked questions about the different breeds.

You sure about that?

See, I can’t think of hamsters without remembering the dearly departed pet of my childhood. I was a little older than him when I too realized my life would not be complete without a hamster. I begged my parents, worked to earn the privilege, and waited impatiently for my visit to the pet store. My mom insisted on a male, and I fell in love with the cutest caramel-colored critter. I named him Dr. Pepper.

A few days later, I noticed these tiny hairless little nubs all around him and promptly freaked out. My parents confirmed that indeed Dr. Pepper – or Mrs. Pepper as perhaps he/she should have been known – had given birth to a litter of pups.

I was more thrilled than my parents with this happy surprise. I instantly started naming them – Pepsi, Coca Cola, Tab,7-UP —  (you get the idea) and promising them to my friends and cousins, who immediately started lobbying their parents for hamsters too.

We didn’t know a thing about raising a litter of hamster babies (no Google back then), but I thought the whole thing was pretty exciting and we did the best we could. A few days later I went into my room to check on the new little family and discovered there were no longer any live offspring in the cage. Turns out, hamster mamas sometimes eat their young, usually because she doesn’t have an adequate food supply to nourish them or she senses something is wrong.

Since we had no idea Dr. Pepper was expecting (the whole “it’s a male” thing, you know) we didn’t provide the kind of prenatal care that she needed, and nursing all those pups was too much for her. We laugh about it now, but it was traumatic at the time. And I was dramatic. “What kind of mother would do that?” I wailed.

It wasn’t the last weird pet experience I had.

When I was in college, I had a cute little goldfish my dad bought me during a visit. Little Nermal swam happily in his glass bowl in my dorm room for most of the school year. When it was time to fly home for the summer, I asked one of my aforementioned cousins who lived near campus to keep him over the break. When I picked him up in the fall, I thought he looked a little different, but didn’t give it much thought, until he turned around that it became obvious that this fish only had ONE EYE.

I wouldn’t have blamed her had she just told me he didn’t survive the summer, but in her haste to replace my late fish, she somehow overlooked this little detail. We still laugh about it, and it made for a good story.

Just like the tale of Dr. Pepper’s unplanned pregnancy. I don’t remember how Dr./Mrs. Pepper  went to hamster Heaven – I must have blocked that out after the miracle birth and subsequent infanticide – but he/she was not with us for long. But I do remember how happy I was to have that cuddly companion while I did.

So of course I relented and took my son back to the pet store to choose his hamster. After much consideration, he settled on a friendly dark brown and white one he named Cookie. It has been fun watching him play with his “very own pet.” We lie on his bed and laugh as Cookie’s tiny feet scramble on his wheel, and my son cuddles him in his arms and talks to him.

“He’s kind of chubby,” he said. last night. “You don’t think there are any babies in there, do you?”

Of course not, I said. He’s just fluffy.